At 6 o’clock on the evening of October 29th (local time), the cultural exchange of “2018 Embrace China: Chongqing Cultural Week” was held at the Conservatory of Music at the University of Szeged, Hungary. The activities were divided into two parts: the exhibition of Chongqing intangible cultural heritage and the traditional Chinese folk music performance. The audience from the Szeged area felt the charm of China’s intangible cultural heritage and was enchanted by the colorful Chinese traditional music.

In front of the Syrup Figurines booth, Mr. LIU Guibing, the representative inheritor of the Chongqing Syrup Drawing, held a sugar spoon and sprayed images on a steel plate. In no time, the image of a light, lifelike dragon was presented to the audience. In addition, Mr. Liu also showed other sugar paintings such as flowers, birds, fish, birds and beasts, which called forth amazed praise from people standing by.

The Chongqing Dough Figurines booth also attracted many people. Mr. TAN Xianhua, the representative of the Chongqing Municipal intangible heritage of dough figurines, showed the audience the different shapes of flowers, birds and cartoon characters. He also demonstrated how a dough figurine was made. Many visitors just eagerly followed his example, rolled up their sleeves and started producing their own masterpieces. They were all excited when they saw their favorite Chinese national treasure giant pandas taking shape in their own hands.

The Liangping Spring Festival Woodcut booth also attracted the attention of a large audience. The inheritor, Mr. XU Jiahui, explained to the audience the historical, cultural and artistic value behind some woodcut works and the themes chosen. Amazingly, the paper used is very precious and the production process is complicated. According to Mr. XU, it usually takes one or two months to finish a large woodcut work. Knowing of this, the visitors expressed their deep respect to Mr. XU, the outstanding Chinese cultural inheritor. 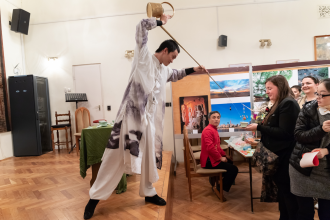 At the same time, the stage of the Tea-ceremony Performance was also crowded with an enthusiastic audience. Mr. LI Bo held a one-meter long-mouth teapot and struck some famous traditional Chinese dramatic postures. Although the movement was very difficult, the tea could always fall firmly in the cup through the long spout. Mr. Li’s elegant posture and his fluid movement just stunned everyone present. 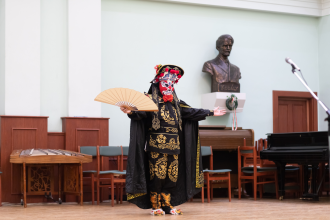 After watching the exhibition of intangible cultural heritage, the excited audience moved to the music hall and began to enjoy a traditional Chinese music concert given by the performers of the Chongqing Folk Orchestra. Through the exquisite performances of the performers, Chinese classic tunes such as “Jasmine”, “Horse Racing” and the “Whisper of Pipa” issued from traditional Chinese musical instruments such as erhu, pipa and dulcimer. After the performance of the familiar Hungarian tune of “Csardas”, the audience gave off a continuous and deafening applause, and Chinese artists had to add several more pieces.

Konfucius Institute
Zhang Xuemei: The Charms of Shanghai lecture on 27th february at 17:30
Board of directors of Confucius Institute
Mid-Autumn Festival during the Confucius Tea House
"Dr. Sándor P. Szabó: The actualities of the Chinese economy" on 19 june
Student success at the “China 360° Blogger” competition