China moved to Karolina for a day

On 9th May 2015, Saturday, May Day was organized in Karolina. This time the topic of the event was China and Chinese culture. SZTE Confucius Institute also took part in organizing the event.

At the opening ceremony at Karolina Kindergarten, Primary School and Grammar School the Chinese director of SZTE Confucius Institute provided an opening speech in which he introduced the colleagues of the Institute, and mentioned all those activities which would bring the world’s most populated country, China, closer to the Hungarian audience. The speech was followed by colorful programs. The students could join Chinese classes, try the art of calligraphy, draw Beijing Opera masks; and traditional Chinese paper cutting was introduced. Last but not least, different kinds of lectures were given about the Far-East country. 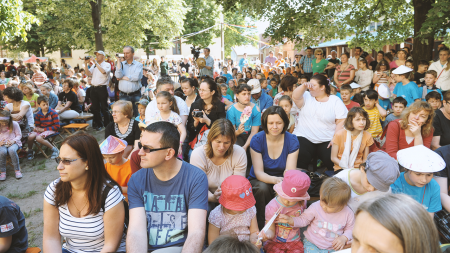 Examples include a Chinese nun who gave a lecture about the relationship of Christianity and China. In addition, Szegedien teachers who already visited China shared their own experiences with the children. They told that in Chinese differentiate 5 seasons from each other, because ‘summer after’ is also counted as one season. Moreover, number 5 defines everything in the life of Chinese since they use the numeral system of five.

Konfucius Institute
Xue Yanping: Wang Anyi – The glittering rose of Chinese Literature - Thursday, 30 May 2013
"Dr. Sándor P. Szabó: The actualities of the Chinese economy" on 19 june
2019 SISU Summer Camp Scholarship
Educational institutions from Shanghai introduced themselves at the University of Szeged
“One Belt And One Road” in My Eyes Essay and Speech Contest