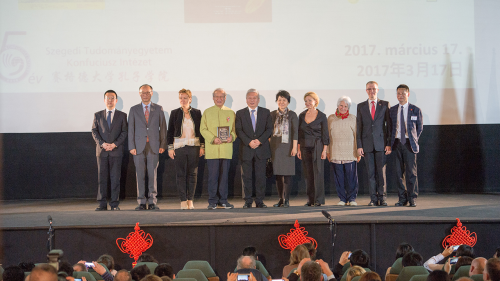 Then Ambassador Duan Jielong delivered a speech. He sincerely congratulated the holding of Szeged Chinese Film Festival at this special occasion of the 67th anniversary of the establishment of diplomatic ties between China and Hungary, and also, paid an earnest tribute to Director Fei Xie who made a special trip from China to Szeged, and thanked all the community for their efforts to organize the ceremony. He pointed out that Sino-Hungarian cooperation will be developed to a wider area and a higher level under the policy of “the Belt and Road” (the Silk Road Economic Belt and the 21st-Century Maritime Silk Road). The existence of Confucius Institute at University of Szeged has created new conditions for the cooperation and communication between China and Szeged. He hoped to achieve a cross-cultural communication in this festival by introducing film director Xie Fei’s cultural-rich films to the Hungarian audience. Finally, the ambassador gladly accepted the commemorative plate for his first visit to Szeged awarded by Prof. Dr. Karsai Krisztina, Vice-President of University of Szeged and member of the Board of Directors at Confucius Institute at University of Szeged.

Then film director, Fei Xie, introduced his award-winning film entitled "A Mongolian tale" which was played after the opening ceremony to more than 300 audiences. And he accepted the commemorative plate for his contribution for the Chinese Film Days in Szeged awarded by Prof. Dr. Nagy Katalin, Vice-President of University of Szeged.

At the end of the opening ceremony, all the cast and crew took a group photo together. Among the audience more than 300 people enjoyed the film entitled "A Mongolian Tale." After the film, Xie Fei invited everyone to the cinema’s gallery to discuss the screened film.