Teahouse with Eszter Kovács and kung-fu

In the afternoon of June 16th, 2016. the Institute organised the last Confucius Teahouse of the current academic year, with Si-Mei Eszter Kovács kung-fu master as guest. During the conversation she talked about the real meaning and philosophy behind kung-fu, as well as about language learning and motivation. Furthermore, the awards of the „My China” elementary school drawing competition were also handed over to the winners. The participants of the Teahouse had the chance to take a look at the exhibited drawings, seeing how the younger generation views China. 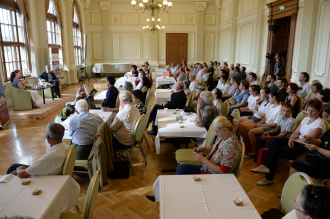 Eszter Kovács openly talked about her own journey that led her to kung-fu, and to China. Apart from being the mother of two, at present she leads a kung-fu school in Szeged, has nine language exams, among which there are European and Asian languages alike. What is more, she has also been working on her PhD research. Eszter spoke about her own relationship with Chinese culture and the Chinese language, and how she fell in love with this world. Eszter, who has been to China more than once, made the audience laugh several times. We also experienced a touching moment, when our colleagues led in Karolin, the Chinese lady as a surprise guest, who graduated from the ZMK in Szeged, and is the adopted sister of Eszter. She was also the one who helped her through the hardships all beginners face when they start learning Chinese. Eszter also shared with us what kung-fu has taught her, and the reason why she decided to come back to her hometown, namely to introduce the people of Szeged to the world of kung-fu.

By the end of the event it was clear that we got to know a hard-working and talented personality. Through sharing her personal experiences she proved that acquiring the Chinese language is not impossible at all, and we also saw that getting acquainted with the Chinese culture is a journey that can take you very far, and inevitably changes you as well.